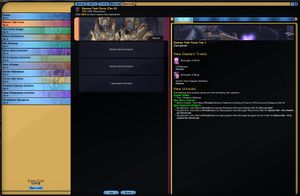 Jem'Hadar Vanguard characters come pre-sponsored in all reputations released before the Gamma Task Force. Additionally, all Jem'Hadar come with two (three if Vanguard) reputations already progressed to Tier V - however, this automatic progression does not trigger the Tier V completion rewards, so progressing to Tier VI in these reputations will still require the full amount of 905 marks, rather than 155 (405 for Omega). Below are the reputations which are already completed for Jem'Hadar: