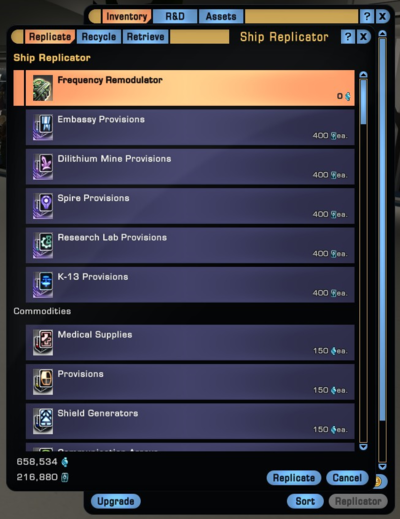 The replicator is a part of the player's personal inventory. It can be used while either in space or on the ground. The replicator can be used to create items in exchange for Energy Credits. It can create Frequency Remodulators, ground consumables, food, beverages, standard-issue shield and phaser, Commodities, and holographic Duty officers.

Players can recycle unwanted items through the replicator and will receive 40% of the item's base Energy Credit value.

It is accessible from the inventory, via a button in the lower right corner. 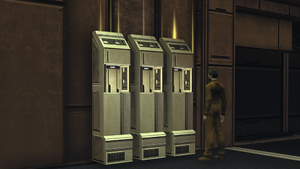 A bank of Tholian-built food replicators

A replicator is a device that used matter-energy conversion technology to dematerialize quantities of matter and then rematerialize that matter in another form. To that end, it is able to use energy to create nearly any object on-demand. This is, however, limited by whether it has the patterns for said object on file, and the complexity of the object. Certain resources such as dilithium or latinum are impossible to replicate. In Star Trek Online, usage is limited to a set number of patterns.

Replicators are common-place for most of the Alliance, particularly for the services of powers such as the Federation, although some more remote areas sometimes like the convenience, such as Nimbus III.

In addition to the player's personal replicator, there are a number of other replicators with unique patterns that act as vendors. These include those at the replimat on Deep Space 9 and the Fleet Starbase. In addition, the replicator on the bridge of the U.S.S. Yorktown issues a one-time [Slusho Mix].

A number of Bartender and Chef Duty Officers add replicator food items. The specific species listed in the tables below add these items in addition to the default.

All non-Klingon Rare and Very Rare Chefs add a disabled Klingon Rokeg Blood Pie to the replicator menu. It is possible to enable it by getting a Klingon Chef. Even KDF chefs seem to work for Federation players.