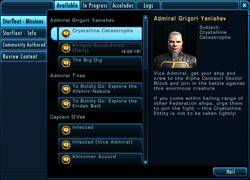 The Remote Contacts window (also known as Hail Starfleet/Hail KDF or Available Missions window) is part of the Star Trek Online user interface and allows players to obtain new and turn in completed missions without visiting the mission giver NPC.

Usually, only the first tab is considered to be the Remote Contacts window, and a key bind to directly access it can be configured in the Key Binds tab of the Options.