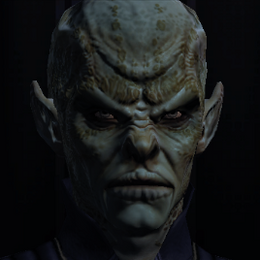 By default, this candidate is lanky and has ashen blue skin with greenish brown spots. He wears a long purple intelligence uniform with gray accents and has tall black boots. He has Romulan Republic Subcommander pauldrons.