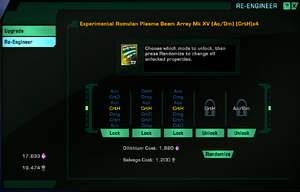 The Re-engineering window. You can choose which mods you want to change and which to keep by unlocking/locking them. Once you have chosen the mods, click on "Randomize" to re-roll them. The re-rolling is random.

The Re-engineering is a mechanic introduced with the Anniversary update of Season 14. It is designed to allow an item's modifier (mod) to be re-rolled at a scaling cost of Dilithium and Salvage. The exact cost depends on how many available mods you wish to re-roll. The re-rolling is random, but it will not re-roll to the existing mod.

Salvage is rewarded from salvaging equipment obtained from the received loot drops, much the same way you would discard or inspect an item. Salvaging the piece of equipment will destroy it and reward an amount of Salvage based on the equipment’s Mark and Quality.

As of release, some items and modifiers cannot be re-engineered. Items include:

Where a specific modifier cannot be re-engineered, it is still often possible to re-engineer other eligible modifiers on an eligible item. Binding an un-bound item by equipping it will not impact its eligibility to be re-engineered.