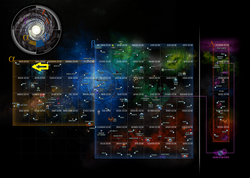 The Raveh System is a system located in the Raveh Sector of the Alpha Quadrant.

The Raveh system is a binary system with a blue dwarf star in orbit of a much larger Class B star. Light from two stars should make Raveh II much warmer than it actually is, but a thick layer of theta radiation in the upper atmosphere reflects much of the energy from the stars, keeping average surface temperatures on the planet low. More than 70 percent of the landmass of Raveh II is covered with snow and ice for the majority of the solar year. 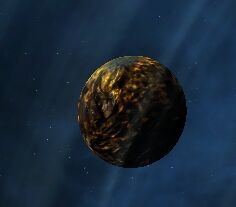 The unnamed moon of the Raveh System.

Two planets orbit two blue stars in the Raveh System and an asteroid belt curls through it. The blue light dominates the system. While Raveh I and its moon are dead worlds, the icy Raveh II supports life.