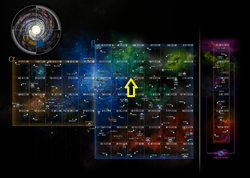 The Rator System is a system located in the Rator Sector of the Beta Quadrant, is the capital system of the Romulan Star Empire under self-proclaimed Empress Sela.

Twin worlds similar to Romulus and Remus, Rator III and IV have become the heart of the new Romulan Star Empire.

Empress Sela maintains a palace on the surface of Rator III, and the Romulan Senate meets in the city of Nova Roma. Much of the rest of the planet is taken up by forests and wild mountainous regions, although Starfleet has intelligence that suggests that there are at least three major Romulan military bases on the planet as well.