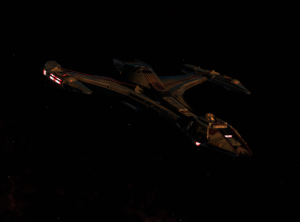 Raptors are a type of Klingon playable starship. They are powerful, medium-sized warships of the Klingon Defense Force built purely for firepower. Raptors are available from tiers 2 through 6 to Klingon characters from the rank of Lieutenant Commander upward. They have good maneuverability and are comparable to the Federation Escort.

Raptors utilize a triangular configuration typical of the Klingon fleet, with bridge forward at the narrow point of the hull, and warp nacelles at the aft corners. The main body of the Raptor follows the center line of the ship from the bridge to the stern, increasing in volume toward the stern. Wings taper back from the neck forward, to the nacelles aft-starboard and aft-port.

All Klingon Raptors have 2 device slots and gain a bonus +15 weapons power.

Some Raptors have been equipped with a hangar bay to launch fighters or other support craft. See the Flight-Deck Raptor page for details. 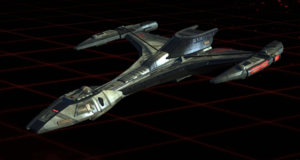 The Somraw Raptor is the first Raptor class starship that players of the Klingon Empire will gain access to. It has very good maneuverability, although not as good as a Bird-of-Prey. In comparison to the Bird-of-Prey which is the only ship at the Lieutenant Commander level for players, it has a better hull and one extra tactical station which is highly beneficial even at lower levels. It does however have a lower shield modifier, lower maneuverability and cannot cloak in combat.

The Qorgh class provides players with an excellent choice to upgrade to if they used the original Raptor. Even if they didn't, it's a very good choice of ship. It is larger than its predecessor but still follows the same design principles. Unfortunately, it doesn't carry extra fore weapons much like the Bird-of-Prey of its tier. For more fore weapons, players should consider a Battlecruiser. 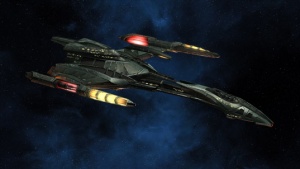 The SuQob class provides players with an upgraded alternative to the standard Qorgh Raptor. The SuQob follows the tried and true configuration that all of the Klingon Raptors currently enjoy but with a distinct saucer, neck sections and nacelles. The SuQob has an additional Engineering console slot and replaces the Ensign Tacitcal Bridge Officer station with a Lieutenant Tactical Bridge Officer station.

The Pach Raptor is very similar in design to the Qorgh other than minor differences. The main difference is the neck stem connecting the main hull to the bridge, which instead of being a solid hull is comprised of several stems. It is the first Raptor to carry four frontal weapon slots and a Commander rank Tactical station. 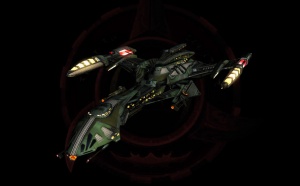 The Puyjaq class is an upgraded version of the Pach Raptor, and follows in a long line of refits born with modifications from KDF allies. Orion and Naussican influences flow throughout the ship's design with reinforced saucer, larger nacelles and ribbed armored hull. This ship also features an additional Engineering console slot and an additional Ensign Tactical Bridger Officer slot than the Pach Raptor, making it tougher and slightly better built for combat than its predecessor. 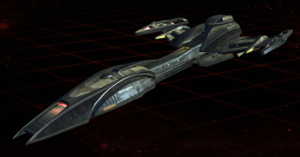 The Qin Raptor is one of the most powerful Raptors available to players of the Klingon Empire and is only available when players reach the rank of Brigadier General. The design is not as progressive compared to the other types. It loses its red nacelles, has smaller wings (in ratio to the size of the vessels) and the neck stem is much smaller due to an enlarged hull at the fore section. The overall structure is vaguely reminiscent of early Andorian Kumari Class vessels due to the wings structural design, as well as the forward hulls size being dwarfed by the forward command module. Regardless, it has a very strong Klingon flavor to its overall design.

The Fleet Qin Raptor is the most powerful Raptor available to players of the Klingon Empire and is only available when players reach the rank of Lieutenant General. In comparison to its standard version, the Fleet version has been upgraded with an additional Engineering console slot and better general Hull and Shield Strength. 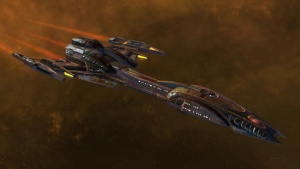 The Mirror Qin Raptor is a powerful Raptor utilized by the Klingon-Cardassian Alliance of the Mirror Universe, and has drifted over into the Prime Universe via the Azure Nebula spacial rift. It features an Ensign Engineering station instead of the Ensign Tactical station on the Prime Universe Qin Raptor, but otherwise is statistically identical.

The Somraw Retrofit is an upgraded version of the standard Somraw Raptor. This version has been modified with the latest Klingon technology and has been brought back in the line of fire along with it. The Somraw Raptor Retrofit is smaller than its Tier 5 counterpart, the Qin, and therefore can turn slightly faster. In addition, it features an Ensign Engineering Bridge Officer station than the Qin counterpart.

The Fleet Somraw class is an upgraded version of the standard Somraw Raptor. This version has been modified with the latest Klingon technology and has been brought back in the line of fire along with it. The Somraw Raptor Retrofit is smaller than its Tier 5 counterpart, the Qin, and therefore can turn slightly faster. In addition, it features an Ensign Engineering Bridge Officer station than the Qin counterpart. The Fleet version has been upgraded with an additional Science console slot and better overall Hull and Shield strength. 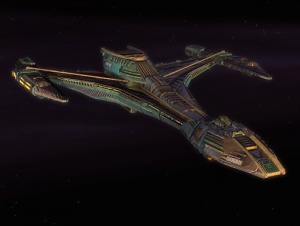 The Mirror Somraw Raptor Retrofit is a powerful Raptor utilised by the Klingon-Cardassian Alliance of the Mirror Universe, and has drifted over into the Prime Universe via the Azure Nebula spacial rift. Like it's Prime Universe counterpart, it is a Retrofit and upgraded version of an older ship. Unlike its counterpart however, it is more Science orientated Tactical ship, as opposed to an Engineering-orientated varient. The Mirror ship replaces the Lt. Cmdr Tactical with a Lt. Cmdr Science, and the Ensign Engineering with an Ensign Tactical. 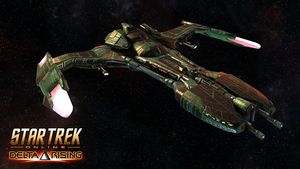 The Mat'Ha Raptor is the most advanced tactical vessel in the Klingon Defense Force fleet. This starship is designed to have unparalleled forward firepower capable of delivering volleys of devastating torpedo fire at its enemies.

The Fleet variant of the Mat'Ha gets an extra Engineering console, increasing the Mat'Ha's survivability.

The Pilot Raptors are fleet-grade starships that have access to Pilot Maneuvers, and differ from the other raptors by having a power bonus of +10 Weapons and +10 Engines. 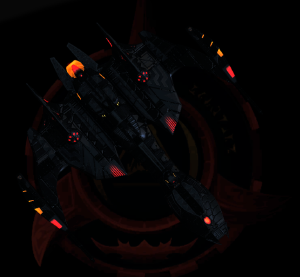 The tactically-focused Kortar gets an even spread between Engineering and Science consoles, and its Lietuenant Commander Tactical seating allows it to get the most out of its weapons. 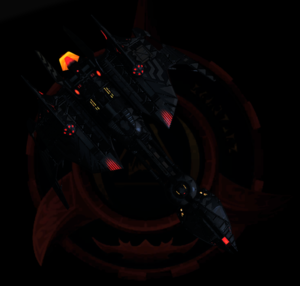 The science-focused Klavek has more Science consoles and a Lt. Cmdr. Science seating for increased exotic damage or support roles. 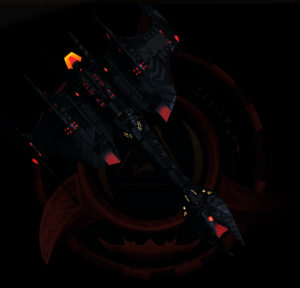 The engineering-focused Qui'Tu has more Engineering consoles and a Lt. Cmdr. Engineer seating for increased durability.

The Raptor is a formidable ship for any opponent, and for a player it brings a large amount of firepower to a fight. The ship is quite maneuverable and can out-match most Federation vessels (except for the Escort type starship). Raptors, like most Klingon vessels, have the ability to equip cannons into their arsenal. The brunt of a Raptors firepower comes from the front of the ship which holds more weapon slots than the aft section. Raptors unfortunately have weak shields due to sub-par Science and Engineering stations.

Raptors, much like a Bird-of-Prey, are superior in numbers compared to solo play although solo play for the ship is still very viable as a play style. They are very quick ships at impulse speeds and are only slightly slower than a Bird-of-Prey. In comparison to Federation vessels are equal to Escort class ships and faster than Cruisers and Science vessels. This provides the player with a good ability to maintain their firepower on specific sections of the opponents shields and hull.

All Klingon Raptors are fitted with a Cloak cloaking device, though battle cloak technology is reserved for Birds-of-Prey.