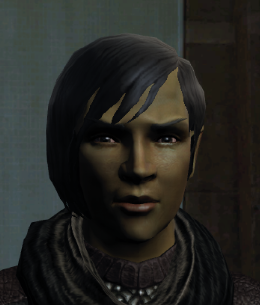 Rai is a Romulan civilian who lived on Virinat before the Tal Shiar-Elachi invasion in 2409.

Rai is a former citizen of Virinat. When khellids attacked Avrak's vineyard, Nevala and Rh'vaurek, the Khellid Keeper, tried to hold them off, but Rh'vaurek got injured. Rai was brought to help him. She assured Nevala that the injured Romulan was fine, claiming that the armor saved his life - he only got a few scratches.

After the Elachi destroyed the colony, she hid in the khellid hives, surviving for days on their nectar. She was able to evade the light Tal Shiar garrisons left behind after the invasion and hiked to another settlement, where she met other survivors. They escaped in an old transport ship, which broke down at Psi Velorum. She eventually found her way to the mining facility on Hfihar. She has observed strange behavior from Madran, and noticed that some people have vanished.