Note that access to certain bridge officers are gated; DSC and TOS captains cannot access 25th century species until they arrive in 2409. Likewise, Romulan and Dominion characters must choose their ally before accessing certain officers. Other bridge officers are limited in number, for example, Federation-allied captains can only access a single Naussican as part of the Diplomacy commendation.

Humanoids are species which are generally intelligent, bilaterally symmetrical, bipedal lifeform. While there are various sub-categories (i.e Vulcanoid, Arboreal, Reptilian and so on), for the purposes of this list it includes any corporeal life broadly using the standard humanoid wire-frame. As a result, providing the game's lore allows, most of these species are accessible as either playable captains or bridge officers. Many others can be created via the alien generator.

Artificial life is a technological creation that has achieved consciousness and intelligence. While their exact status, both philosophically and legally, may be disputed, these beings are usually identified and treated as sentient by those who are familiar with them. These forms of life usually present as humanoid, often as they are created by humanoids in their own image, but they are not bound to that shape.

Life comes in a large variety of forms, from sea creatures to shapeshifters. Some, such as the Tholians, require unique environmental conditions so survive without EV suits. These species are unlikely to ever be playable captains or bridge officers due to the unique animations needed for them (or the powers inherent in their species) but do appear as NPCs. 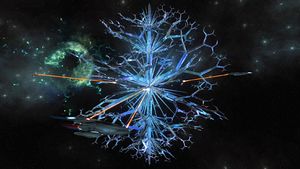 The Crystalline Entity is a large, deadly Cosmozoan that feeds on matter from planets

Cosmozoans are species who live in and traverse open space, rather than being bound to the atmosphere of a planet. These include the Crystalline Entity and Gekli. Due to their radically unique physiology and the failure thus far to establish meaningful communication, their intelligence is difficult to assess.

Non-coporeal beings are those who do not exist as ordinary matter. They often appear as a form of energy, such as the Devidians and Pahvans but for others, such as the Prophets, Pah-wraiths and the Q, any visible form is usually created exclusively for communication with carbon-based life. The latter group tend to possess a great deal of power over the physical world and space-time itself to the extent that they can be, or are, viewed by less powerful species as gods.

Beyond most humanoid species, and others with whom communication is relatively easy, there are a large number of other forms of life (termed as the in-game faction Wildlife). Most of these encountered by the player, such as Sehlats and Aehallh Worms, are not considered to be intelligent. Others, such as the Horta or Tardigrade, are more difficult to assess. The Bluegill, while appearing intelligent, is an artificial parasite and thus its intelligence is innate or derived from its creator. These species often appear as NPCs and as combat or non-combat pets. The jahSepp are fully sentient, although are fungi rather than animals or insects as most other sentient, non-humanoid beings are. 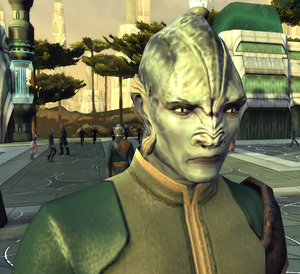 While most races in Star Trek Online are canon, there are a few that are original creations by Cryptic, most notably the Deferi and the Lukari who fulfil leading roles in story arcs and reoccur throughout the game.

In addition, species such as the Tzenkethi and Fek'Ihri are drawn from references and events in episodes but were never seen on screen. As a result, their appearance, and much of their background, is defined by Cryptic.

Early on in the game's history, many more species appeared in exploration clusters, minor patrols and as background characters. Most of these, such as the Aelasans, Dalankrit, Dia'fene, Hylasa, Mokia, and Xaraxian no longer appear in the game as their content has been removed.

Xenexians fall in between as, while not a canon race, they are not created by Cryptic but rather originate from novels.