Quad Cannons have the smallest firing arc of any other weapon (except for Dual Cannons and Dual Heavy Cannons, on which the quad cannons are based) — 45° — but have a larger damage potential than most other starship weapons. 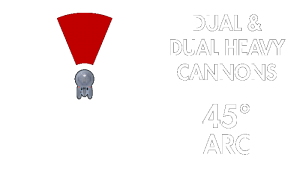 Quad cannons are only available in phaser, disruptor, and plasma damage types, which are listed below. Each type of Quad Cannons offers a different proc (random chance for an attack bonus). The damage done by these weapons are modified by several skills from the skill tables and certain Tactical Consoles. The baseline damage is dependent on the array's Mark level and its rarity.

For more information on the base damage done by Quad Cannons weapons, see the respective weapon type articles.

Quad cannons are only available with [Dmg]x3 modifiers.

Quad Cannons are level-less and so do not have a mark number. Instead the quad cannons scale with the player meaning their damage output is proportional to the player's current level.