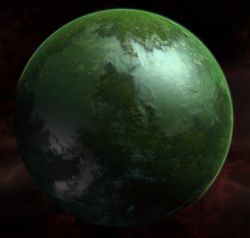 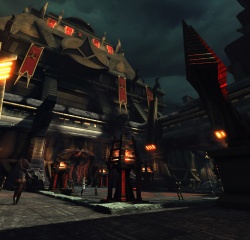 The Klingon First City on Qo'noS

Qo'noS is the Klingon homeworld, located in the Qo'noS System of the Qo'noS Sector. It is surrounded by the Praxis Belt, the shattered remains of the moon that exploded in 2293.

Qo'noS was ruled by the tyrant Molor until the 9th century when Kahless the Unforgettable slew him in single combat using the newly forged Sword of Kahless. Kahless ruled as emperor of a united Klingon Empire and conquered the Fek'Ihri. After his death, Qo'noS was invaded and sacked by the Hur'q. One of the artifacts stolen was the Sword of Kahless.

Qo'noS was first visited by humans in 2151, by Jonathan Archer. By the 23rd century Qo'noS had a large Orion embassy sector and aliens including Trills frequenting it. In 2293 Praxis was destroyed due to overmining which threatened the habitability of the planet. The damage to Qo'noS meant the Klingons could no longer afford to maintain a hostile attitude towards the Federation. Their resulting detente lead to the Khitomer Accords and the Federation-Klingon alliance.