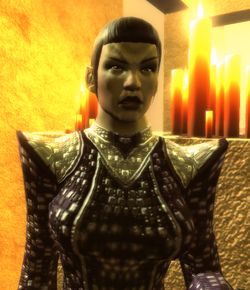 A Prophet appearing as Romulan. 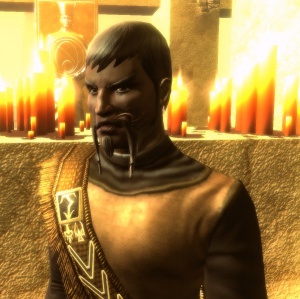 A Prophet appearing as Klingon. 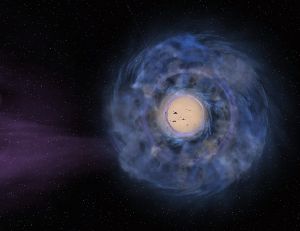 Their home, the "Celestial Temple".

The Prophets are a non-playable race who reside inside the Bajoran wormhole and live outside the normal spacetime continuum. The Prophets take special interest in Bajoran affairs and are revered by them as gods.

Prophets consider mortal humanoids limited in perception, therefore they take on the appearance of persons known to whom they speak. Being outside time enables them to initiate time travel experiences for mortals.

The Prophets consider themselves, the Bajorans and Benjamin Sisko as "of Bajor", suggesting that the planet is their place of origin. Little is known about their society and culture. Bajorans and other mortals use the Orbs to enter contact with the wormhole aliens, although they may not answer. An Orb experience is a vision sent by the Prophets and is not bestowed on everyone.

The structure of Prophet society is unknown. In Orb experiences or meetings in the Celestial Temple (a physical manifestation of their realm inside the Bajoran wormhole) groups of them talk one after another, albeit not indicating a hierarchy. It is possible that they are equal, with no social stratification at all.

Contact with other species occur at their whim. Mortals can try to call them by seeking an Orb experience. The Emissary is a kind of ambassador to the Bajoran people. The current Emissary is Benjamin Sisko, since 2369.