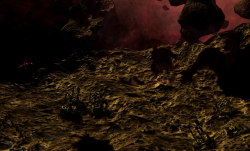 Mines on the remains of Praxis

Praxis was a moon of the Klingon homeworld Qo'noS and the Empire's key energy source.

In 2293, Praxis was destroyed due to over-mining. The moon's destruction had severe effects on the atmosphere of Qo'noS and left behind an asteroid belt around the planet. This new situation caused the Klingons to take part at a peace conference with the Federation, finally leading to the Khitomer Accords.

As of 2409, the remains of Praxis are still exploited by mines.