Player versus Player (also abbreviated to PvP) in Star Trek Online is a format of gameplay that involves players of all playable factions fighting amongst each other. While there is no open-world PvP, the game offers various types of instanced space and ground PvP. Cross-faction, round-based battlegrounds of different types can be accessed under the "PvP" tab in the Mission Journal. Not being "true" PvP, Competetive Wargames scenarios are under the Mission Journal's "PvE" tab. Open War Zones, i.e., non-round-based PvEvP maps, are directly accessed via sector space. Each of these PvP-types offers different rewards, ranging from dilithium

to marks for the reputation system.

A form of "indirect" PvP is available as so called "Competitive Wargames". These entail 5v5 Gauntlet-class War Game Scenarios, in which players will not be engaging in direct battle with the opposite team, but racing against them to solve puzzles and defeat enemies:

These scenarios can be accessed via the PvE Task Force Operations queue, and reward Competitive Marks

which can then be spent in the Competitive Wargames reputation system.

There are two general types of maps allowing "true" PvP (i.e., direct engagements between players): War Zones and round-based battlegrounds. War Zones are continuous, open maps, which permit PvP between the Federation and the Klingon Empire, while both also fight the Borg. Aside from these, true PvP only takes place on round-based battlegrounds, on which cross-faction groups fight each other. Specific Federation vs Klingon PvP can still be organised via private battleground PvP Task Force Operations.

For round-based battleground-PvP there are currently 8 maps available divided among three game types:

To win an arena one side has to reach a number of kills, whereas (ground) assaults and (space) capture and holds require your team to complete the given map tasks or to reduce the enemy squadron's influence to zero, respectively. 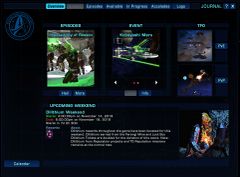 PvP Task Force Operations can be accessed from the Mission Journal

Both public and private PvP matches count towards the daily missions. Squad support is turned off and injuries are disabled.

Public PvP Task Force Operations are the first menu seen and require eight to ten players to start with up to 20 in a TFO. To queue up, select the PvP and press the Join Queue button on bottom right. TFOs are split by rank:

Arenas are set to 15 kills, assaults to 52 bypassed security layers, and capture and hold to 1200 influence.

Private TFos, or challenges, can be created that can hold up to two teams of 5 (20 players) and requires five players to start. Arenas can be set to 5-100 kills, assaults to 10-300 bypassed security layers, and capture and hold to 100-5000 influence.

PvP Task Force Operations are accessible at level 5, and are subsequently divided in ten level blocs for access after level ten (See illustration above), in order to facilitate a more even playing field and prevent max-level characters from catching brand new characters underequipped and underprepared in the public queues.