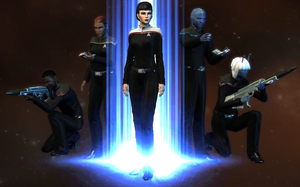 A Federation player character and her bridge officers on the character selection screen.

Player characters (often usually termed "Captains") in Star Trek Online are those characters operated by human players. In-game, they are personified by their character's avatar who plays the story in one of the game's factions. On space maps, they are represented by one of their starships, albeit with their "Captain" commanding it.

A new account comes with the ability to make one character per faction, with the ability to buy nearly 50 extra Character Slots. Many rewards gained are instantly unlocked across the account (for example, headline rewards calendar events are unlocked for all characters automatically) with other things that can be sent to other characters via the Account Bank or Mail. 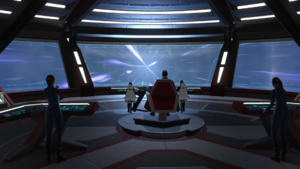 Players can choose to join one of the game's playable factions, such as Starfleet or the Klingon Defense Force. This starts them at the Tutorial which is the story of how they gained command of their ship. The character's story before then is entirely down to the player., but Romulan Republic characters do have some early dialogue which gives the player the option to outline some of their character's history.

The early game story gives the character their faction-specific storyline as they gain notability. From mid-to-late game most factions share missions and the character's stories become largely identical to each other. A partial exception to this is Dominion characters who enter the story late-game and will only play earlier stories as a simulation, having not experienced any of those events themselves.

Players may select their character's race (aka species) from those available to their chosen faction, or create their own

Several race-specific traits are automatically assigned when the character is created, with an additional trait slot being unlocked every 10 levels (up to level 50). As these slots become available, players can select traits which benefit themselves or their team. Traits are generally chosen based on gameplay sytle, strategic role, profession, or the character's background. 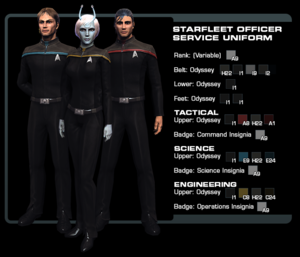 Players may choose one of three primary career paths. Characters may be Engineers, Scientists or Tactical officers. This does not limit what skills the character can choose while levelling up, or what starships they fly. But it does limit certain kit modules and abilities.

Your character's rank and level increased as you progress through the game from level 0 to level 65, with the associated rank changing approximately every 5-10 levels. So Between level 10 and 19 your character is a Lieutenant Commander, and on reaching level 20 they are promoted to Commander, which they will stay at until they exceed level 29. Levels are universal, but rank names differ between factions. Increased levels grants new abilities, systems, ships and zones.

The innate abilities are supplemented by various skills

Further abilities are unlocked through the game, or granted by Kit Modules. Some are unlocked by level or all captains while others are career or species-trait specific. For example 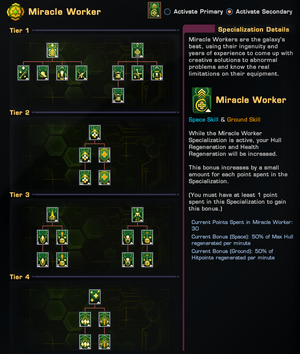 Your captain's powers can be further expanded through training in Captain Specializations. These are built up through specialization points earned through levels gained post level 50. Spending points on a Specialization tree earns new passives, unlocks bridge officer abilities and grants starship traits.

Any character can have multiple starships to choose from and several accompanying bridge officers. All of these have a high degree of customization, not limited to currently equipped armour, with further options available to buy or unlock.

Via the Alien option players are able to create their own races, allowing them control over facial features, size and proportion, and general appearance. This allows players to create races that are unique.

A wide array of uniform and other tailor unlocks can grant further customization options for your captains and bridge officers, while ships can be customized with hull materials and vanity shields.

Via the terms of use, Cryptic Studios prohibits players to

Thus it should be assumed, that each account belongs to a single natural person, thus misconduct (e.g. by posting profanity on the forums) is usually sanctioned per account.