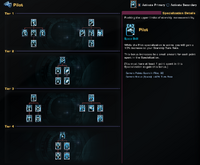 While the Pilot specialization is active, you will gain a 10% increase to your Starship Turn Rate.

Any Tactical, Engineering or Science Bridge Officer can be trained in Pilot specialization by using the [Specialization Qualification - Pilot]. Said item is unlocked for crafting in the Officer Training R&D School once 10 points have been spent in Pilot Specialization, or may be purchased from the Exchange.

Space is the only playground of a Pilot. These officers focus their efforts exclusively on combat maneuverability in zero-gravity environments.

The following playable starships can be classified as Pilot Starships:

Much like how players are able to perform active dodging/rolls on ground, these starships can perform these maneuvers by double tapping in the direction they’d like to perform a special maneuver. These maneuvers can be rebound to different keys, or activated manually from a UI element if the player so desires. After activating a Pilot Maneuver player will be briefly immune to damage.

A large number of playable Tier 6 starships come with either an Ensign, Lieutenant or Lieutenant Commander Pilot BOff seating. However, these ships lack the built-in Pilot Maneuvers, and are thus not considered to be Pilot Starships.