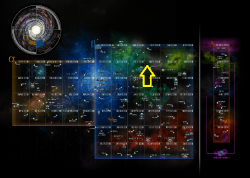 The Pilatus System is a system located in the Argama Sector of the Beta Quadrant.

The Pilatus system is comprised of three planets in extremely close orbit around a Class-B dwarf star. The relatively short distances between the worlds gives rise to a great deal of seismic instability, and events on one world can influence seismic activity on another.

A small colony was founded on Pilatus Prime in 2382, but it was evacuated less than six months later after a massive landquake on Pilatus II caused a similar series of disturbances on Pilatus Prime. The Starfleet Corps of Engineers has offered to assist the Romulan military in retrofitting the world with seismic stabilizers, but its offer was refused.