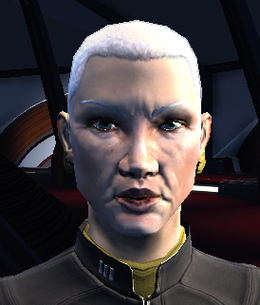 Commander Philipa Matthias is the Human counselor of the U.S.S. Enterprise-F.

Philipa's great-grandmother was a Vulcan, and her husband is Bajoran. She was posted to Deep Space 9 after Ezri Dax left to command the U.S.S. Aventine. After DS9, she served on the U.S.S. Fletcher, then worked as a counselor at Starfleet Medical until finally being offered the position of Ship's counselor of the Enterprise by Admiral Beverly Crusher.