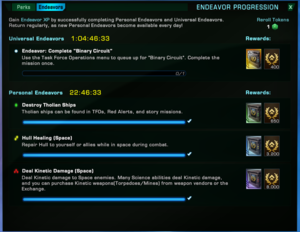 UI element for an active Endeavor

The Universal Endeavor System is a limited-time challenge based reward system for endgame players (level 60+) in Star Trek Online. Every two to three days (Resets on Monday, Wednesday, Friday) at 17:00 UTC, a new task is distributed server-wide and any in-progress/uncompleted tasks will expire. These challenges range from completing R&D tasks or missions, to dealing damage to enemies with a specific energy type. Upon completion, a small amount of Expertise and Experience Points are awarded along with an [Universal Endeavor Prize Pack] as well as 400 Endeavor XP. 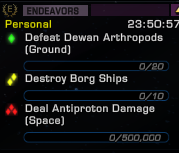 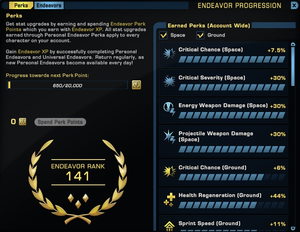 All players receive one free perk point upon reaching level 60, or were awarded one upon release of the system. After getting 20,000 Endeavor XP, a new Perk Point becomes available. Players can then spend these Perk Points on account-wide bonuses that apply to all characters equally. There are 30 categories in total - 14 Ground, 16 Space - and each category can have 15 points spent on it, for a total of 450 points. When spending a Perk Point, the system randomly pulls three categories from the above to choose from, except those that are already maxed out.

The entries below link to a related Skill in the game, though it should be noted that for perks that give a percentage boost, they do not boost skill directly and do not all boost them by the equivalent amount. For example, the Hull Regeneration (Space) perk gives +4% per node, which is equivalent to +4 Damage Control skill, while the Max Hull (Space) perk gives +1% per node, which is equivalent to +3.(3) Hull Capacity skill. Other entries are not as directly linked to skills, eg. the Weapon Criticals ground skill boosts both Critical Chance and Severity, but those are separate perks. Visit the linked skill pages to compare their benefits.