Patrols can have varying objectives, from clearing the system and providing aid...

Patrols are small-scale missions on a 30 minute cooldown accessible from a large number of systems in the Alpha, Beta and Delta Quadrants. However, most of the patrol missions are only accessible to Starfleet-aligned captains.

While most are combat-related, there are a number of patrols that involve diplomacy, negotiation or racing. Examples include “Honod System Patrol”, “Patrol the Muso System” and “Hodos System Patrol”. 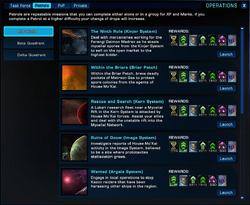 Added with Season Eighteen: Awakening, the Patrols tab can be accessed from the TFO menu. It contains 10 Space Patrols, including the five Mycelial Operations, and five remastered Delta Quadrant patrols. These patrols can be launched directly from the menu, but can also be accessed by flying to the corresponding star system in sector space. Mycelial Operations can also be found in the Episodes tab, in J'Ula's Discovery arc. The 2020 First Contact Day Special Event saw the introduction of the first Ground Patrol in the Patrol UI.

Each patrol rewards 15 Reputation Marks and 500 Dilithium Ore as well as Triple Skill Points useful for progressing your Starship Mastery. Each day, the first patrol completed on each character will reward 2x Marks & 500 Bonus Dilithium Ore. They can be replayed every 30 min. The cooldown will also activate if you leave the system before completing all of the objectives.

Playing a patrol at higher difficulty will increase the chance of item drops.

Other patrol missions can be accessed only by approaching the star system. With time, some of these patrol missions may be updated in a similar fashion as the five Delta Quadrant patrols and added to the Patrols tab.

The following patrols are only available to Federation and Federation-aligned players. This includes the 25c Starfleet, TOS Starfleet, DSC Starfleet, as well as allied Romulan Republic and Dominion characters. These patrols cannot be replayed, and reward only skill points.

The following patrols are available to players of all factions. They can be replayed every day. Leaving the system before completing the objectives does not activate the cooldown.

The Deferi, a small spacefaring civilization from the Alpha Quadrant, have requested aid from their allies in the Federation and the Klingon Empire. Breen Confederacy continues harassing and kidnapping their people and destroying their transports.

Daily missions can be picked up by contacting Surah from Sector space while in the Deferi Sector.

The following patrols are available to players of all factions upon reaching Level 50. They can be replayed every 30 min. Each run rewards 10 Romulan Reputation Marks and 480 Dilithium Ore. Leaving the system before completing the objectives does not activate the cooldown.

With Season Seven: New Romulus the Beta Quadrant was expanded to include the territory of the nascent Romulan Republic. New space patrols were added to populate the new sectors.

The Tal Shiar and their allies, the Hirogen, are not the only ones who want to bring down the Republic. Various enemy factions, such as the Nausicaan, Gorn, Tholians, continue raiding and pillaging the Romulan star systems. If the Republic wants to survive, it must be able to defend itself. U.S.S. Enterprise F and I.K.S. Bortasqu', flagships of Starfleet and Klingon Defense Force fleets, can also join you to provide assistance.

The following patrols are available to players of all factions upon completing “Escalation” story mission and unlocking the Delta Quadrant sector map. They can be replayed every 30 min. Each run rewards 10 Delta Reputation Marks and 480 Dilithium Ore. Leaving the system before completing the objectives does not activate the cooldown.

Released with Delta Rising, the new patrol missions offer a deeper insight into the state of the Delta Quadrant over three decades after the U.S.S. Voyager's journey. The patrols fill in the gaps in the Delta Quadrant story arc. While the story arc can be played without them, most of the patrols help connect individual episodes, and should be played in specific order.

Delta Quadrant patrols remastered with Season 18 and made available through the Patrol menu are not mentioned here, but can still be accessed by flying to the corresponding star system.

For more information on the chronological order of the patrols, check: Story Arc: Delta Quadrant.