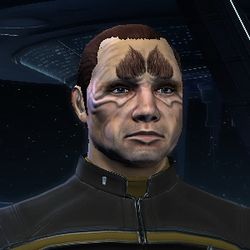 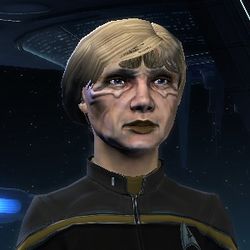 Pakleds are a humanoid species native to the Alpha Quadrant, but do not generally align themselves with any political faction. By 2409 Pakleds have joined the United Federation of Planets. Pakleds are a playable race in Star Trek Online for the Federation faction. Starting with Season 5, they are unlocked for all players.

Pakleds are typically heavy-set humanoids that feature sunken eyes with bushy, upward-pointing eyebrows, a series of folds beneath their eyes and a drooping lower lip. Males of the species tend to have receding hairlines.

The Pakleds are a largely nomadic species that often trade, scavenge or steal from other species for their technology. Pakleds have underdeveloped verbal communication skills. Due to this, many people underestimate them, thinking that they are too intellectually challenged to be devious, which they use to their advantage.

While most Pakleds are politically unaligned, a few have chosen to join Starfleet, where they have demonstrated that they can become more than simple nomads or traders.