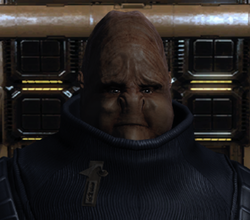 The Overlookers are a race originating from the Delta Quadrant and members of an economic power only known as Hierarchy. Although the Overlookers claim they are one of many species that form the Hierarchy, they are the only one encountered by the forces from the Alpha Quadrant, which could mean that they are either in charge or that their tales of powerful alliances are deceptions.

Overlookers are humanoids with dull brown skin and generally nondescript features. Their heads are lumpy and hairless, with few distinguishable facial features. Additionally, all seen members of the species possess a rotund appearance with a relatively nonathletic build compared to other humanoid species.