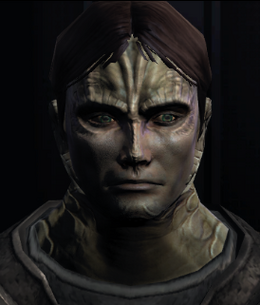 Orra Val is a Cardassian civilian leading the farming colony on Goralis III. He suffers from Yarim Fel Syndrome, a fatal disease for which the cure is derived from meya lilies, a key crop in the colony. Gul Granspir used this fact to force Val to assist the True Way. When the True Way built equipment in caves beneath the colony which contaminated the water table, Val requested water purifiers from the Federation.