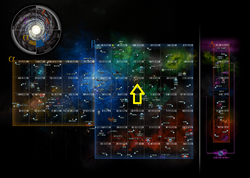 The Orith System is a system located in the Rator Sector of the Beta Quadrant.

The Orith system is dominated by Orith Prime, a large hydrogen-helium gas giant with significant amounts of chlorine and sulfur in its atmosphere. In close orbit with Orith Prime is Orith II, a small M-Class planet covered in jungles and thick vegetation. Empire scientists say that the atmosphere on Orith II is not hazardous, although they speculate that the influence of the gas giant has led to unusual aberrations in the planet's ecosystem.

Intelligence reports indicate that Nausicaan pirates have taken up residence in clusters of asteroids drawn into orbit by Orith Prime's massive gravity well. Captains in the region are advised to use caution when exploring the region.