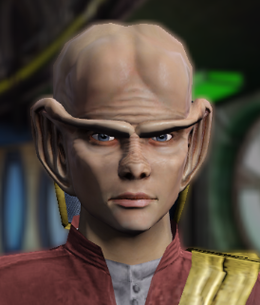 Onna is a Ferengi engineer and first officer of the Coldstar. She is married to that vessel's captain, the Na'kuhl Varh. During the Phoenix Prize Pack promotion, she serves as a vendor located on the Promenade at Deep Space 9.

Prior to joining the crew of the Cleaver, Onna had a husband on Ferenginar. Fed up with five years of living her life naked and rubbing her husband's lobes whenever he said so, she broke her marriage contract and struck a deal with the Orion Syndicate, booking passage to Nimbus III in exchange for a case of Romulan Ale and engineering shifts.