A projection of Omega

For other uses, see Omega.

An Omega Particle (also known as the Omega Molecule, or Particle 010 by the Borg) is a highly unstable molecule believed to be the most powerful substance known to exist. It is mainly used by the Iconians as a source of power, notably in their Dyson spheres. Omega is known to gather energy, like a sponge in water, which is how a single particle generates so much power.

With sufficient amounts of boronite the molecule can be synthesized. Without proper containment to stabilize the particles, Omega can destabilize violently, destroying subspace and rendering warp travel impossible in a large area. 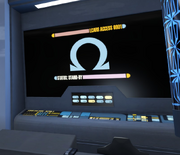 The Federation succeeded in synthesizing a particle in the late 23rd Century. It existed for a fraction of a second before exploding; killing the research team and creating a subspace rupture that made warp travel impossible for light-years around the station. The accident was covered up, claiming the impassability of the Lantaru sector was a natural phenomenon. The Federation concluded that Omega was a threat not only to the Federation, but to the Galaxy as a chain reaction of just a handful of molecules could destroy space-faring civilization throughout an entire quadrant.

Every Starfleet captain is briefed on Starfleet's Omega Directive; with it being classified to every other individual. When a starship detects an Omega Particle, the Omega symbol appears on displays with crew locked out of controls until the Captain releases the Computer. Standard procedure is to call in specialized teams to locate and eliminate any Omega particles. However, when the U.S.S. Voyager detected Omega particles while trapped in the Delta Quadrant, it launched its own mission to carry out the directive. The directive takes priority over the Prime Directive.

The Solanae Dyson Sphere was the Alliance's first encounter with the Iconian's use of Omega as a power source. It was built throughout the sphere and was of great interest to the Voth who were competing with the Alliance for control. However the Voth did not appreciate the danger of the particles. As well as powering the sphere, Omega helps it to "jump" to different points in the galaxy. Further encounters with the Iconians found that it powered their technologies, including their ships and Iconian gateway network.

In the Omega Molecule Stabilization, Q has spread Omega particles across the Galaxy that the player must secure before they destabilize.