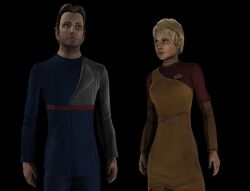 Ocampa are a humanoid species native to the Delta Quadrant.

After the Ocampan homeworld was accidentally devestated by Nacene explorers 3,000 years ago, one of them, later known as the "Caretaker", built a vast underground city and provided the Ocampa with energy, food, water and protection. Nearing the end of his life, he forcibly brought ships from all over the Milky Way to his array in order to find a mate to create offspring. As none of the species he found were compatible, including the crew of the U.S.S. Voyager in 2371, the Caretaker died and the Ocampa were left with energy and supplies lasting until 2375.

By the late 2370s, the Ocampa, whose natural lifespans are only a few years long, started sending out generational ships into the Delta Quadrant, seeking new allies such as the Talaxians and a new home. By 2409 at least one Ocampa, Lieutenant Linnea, was serving in Starfleet. 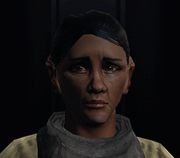 Ocampa use unarmed freighters and generational ships to travel throughout the Delta Quadrant.