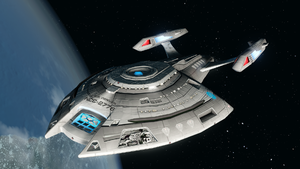 The Federation Nova-class starship is a set of starship classes from the 24th century and redesigns from 2409 onwards.

The Nova class was designed for short-term planetary research missions. It was placed in service starting in the mid-to-late 24th century. It is not typically suitable for combat operations. In Star Trek canon, the Nova design has a maximum speed of warp 8 and approximately eighty crew members.

See the template to the right for a list of playable starships and NPC mobs in Star Trek Online based on the Nebula. Most ships parts from the design variants are interchangeable where the relevant ship has been bought.