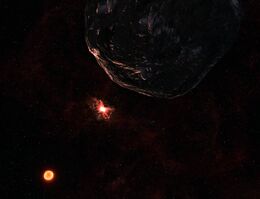 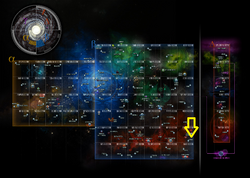 The Norgh System is a system located in the B'Moth Sector of the Beta Quadrant.

Several small chunks of irregularly-shaped barren rock populate the Norgh system. This system occasionally hosts strange energy fluctuations, and sometimes lone ships passing through the system will report seeing a vessel of unknown configuration on scanners for just a moment before the other ship is gone. 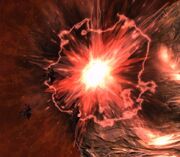 A Fek'Ihri Portal: Origin of the invasion.

There are no planets around the system's star but the rocks form a wide circle amidst the red and black of space. Within the circle, two clusters of large planetoids have formed along the belt's trail. The Fek'Ihri have opened three portals near one of the clusters. Furthermore, twe anomalies can be found in proximity to those rocks, too.

“Blood of the Empire”: Investigating a missing battle group, the KDF encounters aggressive aliens. Their commander, the Fek'Ihri Horde Leader, claims they are in facte the mythical Fek'Ihri, a dreaded ancient enemy of the Klingons. Following their defeat and the destruction of the portals, the Fek'Ihri invade the Praxis Belt and Qo'noS.