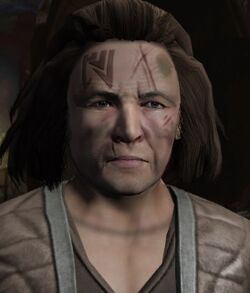 The Nol-Ennis (or simply, Nol) are one of two rival factions (the other being the Ennis) of a humanoid non-player race native to the Ennis System in the Gamma Quadrant.

The Ennis and Nol-Ennis were first encountered by the Alpha Quadrant powers when a team led by Benjamin Sisko crash landed on a prison colony in the Olt System. Members of the two warring factions were imprisoned there with microbes that would ensure they were immortal, condemning them to live out their war for all eternity.

As Sisko's team discovered, following the death of Kai Opaka, any attempt to leave the planet after resurrection by the microbes would be fatal. Sisko's team were forced to leave Opaka and the prisoners on the moon, with Opaka intending to bring about peace between the two sides during her exile there. ("Battle Lines", “Armistice”)