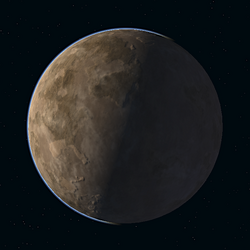 Nimbus III (or "The Planet of Galactic Peace") is the third planet in the Nimbus System located in the Hobus Sector. Although its capital Paradise City is open for people of any allegiance, Hassan the Undying and his Orion Syndicate control most of the planet.

Named the "Planet of Galactic Peace" in 2267 after the Federation-Klingon War, Nimbus III was supposed to be the model for a new age of peace and mutual cooperation. It was instead an inhospitable rock that was soon controlled by gangs and beset by violence. After the Vulcan Sybok briefly occupied the capital of Paradise City in 2287, the Romulans, Klingons, and Federation all pledged funds and assistance to help the planet.

The cleanup effort was a failure, and the population rebelled constantly against anyone they saw as "authority". The last Starfleet officers were evacuated in 2318. Since then the planet has been a haven for criminal operations and unchecked violence.

Despite or perhaps because of its distance from the major powers after the destruction of Romulus, Nimbus III has a diverse population of many different species, including Andorian, B'abynii, Bolian, Breen, Caitian, Daxxtarian, Easathir, Ferasan, Ferengi, Gorn, Hirogen, Human, Klingon, Lethean, Liberated Borg, Nausicaan, Orion, Pakled, Reman, Romulan and many others. The inhabitants of Nimbus III are collectively referred to as Nimbosians. 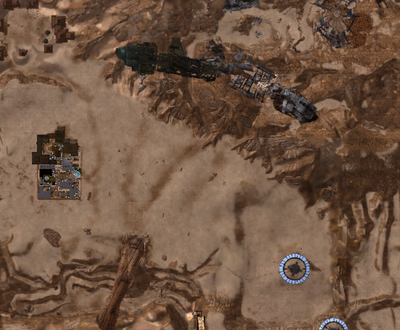 The entrance to Paradise City

Paradise City, such as it is, is the capital and only main settlement of the planet Nimbus III. Established in 2267, Paradise City housed the representatives of the three governments in control of Nimbus III, the United Federation of Planets, the Romulan Star Empire and Klingon Empire.

After the collapse of Diplomatic negotiations and failure of the subsequent clean up efforts, control was lost to the populace, who were mostly undesirables and outcasts.

Ruled by thugs and Hassan the Undying, second in command of the Orion Syndicate, Paradise City is a hotbed of smuggling and thievery.

All missions for Nimbus III are obtained in locations inside the settlement, mostly the bar immediately in front of the main (and only) gate.

Extending east of Paradise City, the desert is home to dangerous wildlife.

Located Northwest of Paradise City, the ruins were a meeting place for the Orion Syndicate before they were overrun by Aehallh worms.

Located to the Northeast of Paradise City, the remains of a crashed starship serve as the approach to the stronghold of the Orion Syndicate. Hassan the Undying's stronghold, Shangdu, is located here, as is an outdoor prison used by the Syndicate.

Hassan's fortress contains a bar and combat arena. By 2411, after his defeat, it is run by Madran. It is only accessible by playing “The Undying” and “Partisans”.

Located South of Paradise City, the canyon is under the control of a pack of Gorn separatists. They control the passage to the satellite installation.

Located to the far Southeast, this is the location of Installation 18, a secret Tal Shiar facility.

The facility is only accessible during “Installation 18”.

A number of accolades can be obtained on Nimbus III: