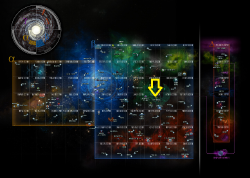 The New Romulus System is a system located in the Azure Sector of the Beta Quadrant.

It has two suns and at least three planets, the third of which is now known as New Romulus, the capital of the Romulan Republic. There is also a transwarp gate and two moons (one of which is shattered) in orbit.

Records indicate that the colony ships that left Vulcan after the Sundering spent several months on this planet. Mostly abandoned since then, this M-class world is now the home of New Romulus, a colony made up of Romulans and Remans seeking to create a new society and a new homeworld.

Radiation levels and seismic instability on the planet indicate that there was a world-wide cataclysmic event in the world's distant past. It will take more study to determine exactly what happened.