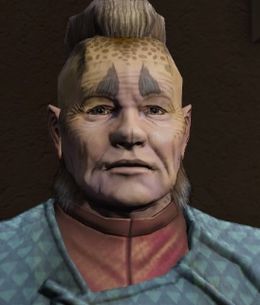 Neelix is a Talaxian male, leader of the New Talax community, and Federation ambassador to the Delta Quadrant. He is best known for his tenure as the U.S.S. Voyager's Chef and guide while the ship was lost in the Delta Quadrant from 2371 to 2378.

In 2371 Neelix encountered the Federation starship U.S.S. Voyager when the ship was lost in the Delta Quadrant. After proving his knowledge of the region and his skill as a chef to Captain Kathryn Janeway, Neelix was allowed to join the crew as chef and guide to the Quadrant. Neelix would remain on Voyager during the next seven years, until meeting Dexa and joining her on an asteroid colony inhabited by a group of ca. 500 Talaxians located tens of thousands of lightyears away from their homeworld.

By 2410, the Talaxian community has grown to ca. 3,000 members and moved to a different asteroid colony in the Entaba System. Neelix has become the de-facto leader of the colony and is helping his fellow Talaxians find a new planet to call home. Upon the arrival of the Delta Alliance, Neelix was also made Federation Ambassador to the Delta Quadrant. 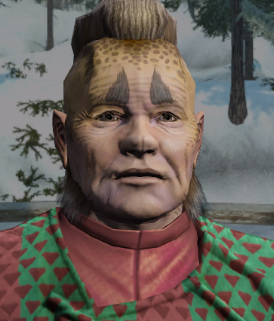 Recipes can be found in Winter Wonderland's “Winter Invasion” mission. Bring these to Neelix who will guide you collect, buy and or replicate certain ingredients to make these winter foods. The food created with these recipes can be fed to any type of tribble to create a Winter Tribble. These tasks take the form of missions.

Recipes are required to make any of the winter event consumable foods. The recipes are found during the “Winter Invasion” Task Force Operation. It's location is highlighted by a green circle on your minimap and must be collected before the TFO is completed. When someone on your team obtains it you will receive a popup saying that you have found it, but you will not have collected it until you interact with the package yourself.

You can obtain one recipe during Winter Invasion, which will be one of the following;

Once collected the recipes will appear in your inventory. When you've obtained a recipe, speak with Neelix to begin the mission and start collecting ingredients.

After obtaining a recipe you need the ingredients to make/bake the food. There are three categories of ingredient.

Once you have all necessary ingredients you can talk to Neelix and complete the mission and be rewarded with several of the food you have created and several holiday commodities such as Bolian Candles, Terran Holiday Ornaments and Targ Fur Earmuffs.