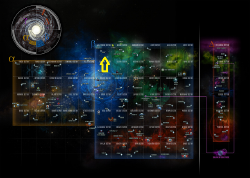 The NGC 1218 is a system located in the Ponor Sector of the Beta Quadrant.

Shortly after the destruction of the Romulan homeworld in 2387, a fleet of Federation vessels speeding to the Romulus system to offer aid were intercepted by the former miner Nero and his vessel Narada near NGC 1218. Sixteen Starfleet vessels were destroyed in the resulting battle.

Starfleet has attempted multiple salvage operations over the years, but most efforts have been blocked by Romulan and Reman forces. While the remains of approximately 2,400 Starfleet officers have been recovered, the debris from their ships remains as a testament to their willingness to risk their lives to help others.