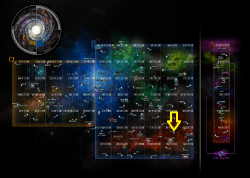 The N'Vak System is a system located in the Gorath Sector of the Beta Quadrant.

Like the Ker'rat System, it is an access point to the Space War Zone, in which players must complete certain objectives and fight against the Borg. Both systems feature a large Borg presence with a scenery containing a small cracked planet and Borg remains.

An equivalent ground war zone can be accessed from the nearby Qay’ghun System, as well as from the Otha System.

The jungle world of N'Vak once hosted a prosperous Klingon colony, but it was annihilated after an infection by a mutagenic virus. It now serves as a popular site of hunting expeditions and rite of passage ceremonies. Borg invaders cannibalized one of the planet's small moons to build a repair facility, thereby turning this system into a heated battle zone for the Klingon Empire.