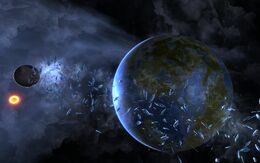 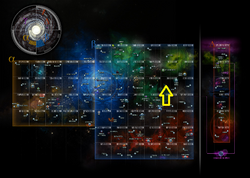 The Mylasa System is a system located in the Gasko Sector of the Beta Quadrant.

In several respects the Mylasa system is very similar to the Sol system. The fourth planet in the system is a temperate M-class world orbited by a single moon, with several landmasses separated by large ocenas. Unlike Earth, however, Mylasa IV is surrounded by an asteroid belt with a high percentage of Verteron Particles. Because the only other known source of self-sustaining verteron particles is the Bajoran wormhole, Federation scientists theorize that this system may have been the location of a wormhole that has since destabilized.