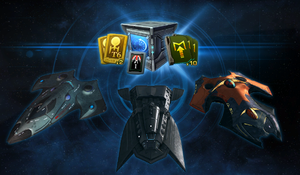 but like all items in Mudd's Market can be discounted up to 50%.

Buying this bundle will grant the player a choice pack of the following six items:

The player is able to claim three of the six items above. For example, buying the bundle once would allow a player to claim all three ships with one purchase, any subsequent purchases would remove the three ships above from the reward pool. Players would then be able to purchase this bundle more than once for the remaining three items infinitely, but they cannot claim three of a single item per purchase: for example, you cannot claim thirty Ultimate Tech Upgrades.

Selecting any of the starships among these prizes will grant you an Account-Wide Unlock allowing the applicable ship to be claimed from the Ships Tab of Mudd's Market.

T6 Ship Coupon - 100% Off may only be used on starships found in the Tier 6 Starships tab of the Zen Store.