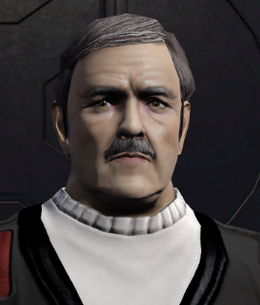 Montgomery Scott was a Starfleet Engineer who rose to fame as Chief Engineer of the U.S.S. Enterprise.

Montgomery Scott was born in 2222 on Earth. He joined Starfleet in 2241 and worked on eleven Starships until his retirement in the early 2290s.

In 2265 Scott spent his shore leave on Drozana Station. There he became trapped in the Devidian plot to invade the Neutral Zone. Together with an unknown individual he saved the station from being flooded with triolic waves.

Later that year Scott was assigned to his most famous position aboard the original U.S.S. Enterprise. He took part in that ship's famous five year mission under Captain James T. Kirk. After this time he was responsible for the ship's refit. After the destruction of the Enterprise in 2285, he assumed the post of chief engineer aboard the U.S.S. Enterprise-A.

In 2293, after the Enterprise-A was retired from service, Scott was an honored guest on the maiden voyage of the Enterprise-B. One year later he disappeared together with the U.S.S. Jenolan.

Scott's fate was not discovered until 2369, when the crew of the Enterprise-D found him in the transporter buffer of the U.S.S. Jenolan which had crashed on a Dyson sphere. He was rescued and left the ship aboard a shuttle. 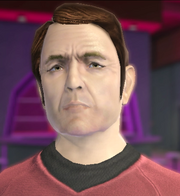 Scotty in the 23rd Century.