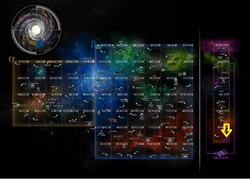 The Molinya System is a system located in the Yontasa Sector of the Delta Quadrant.

Home to a non-warp capable species of little consequence, the Molinya system is more well known for the significant deposits of dilithium and deuterium that can be found on Molinya VI. The Hierarchy have launched several mining expeditions to the system, but their efforts have been thwarted by packs of Hirogen hunters. They are investigating whether the cost of outfitting a completely-automated operation would cut too deeply into their profits.