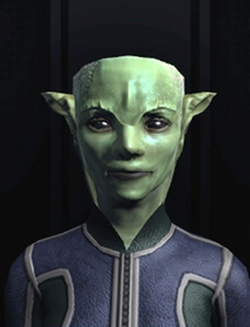 In Star Trek Online the Mokia are a species primarily located in star clusters near Romulan space, such as the Eridan Belt, the Khazan Cluster, and the Afehirr Nebula.

The Mokia are a humanoid species with green pigmented skin and dark eyes. The tops of their heads are noticeably flatter than most other species. They have distinct ears, eyebrows, and a slight vertical ridge in the center of the forehead.

The Mokia are polytheistic, meaning they hold the belief of multiple deities. Little more is known about their culture.

The Mokia often struggle with attacks by the Hirogen. These encounters have included raids on their vessels as well as blockades of their outposts.