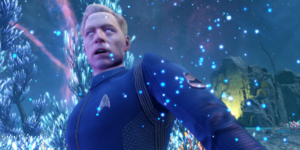 The Stamets hologram wearing an emitter

A mobile emitter is a mobile holographic emitter capable of sustaining a Photonic lifeform in any environment.

The technology was obtained during the 24th century from the 29th century during a visit to the 20th century, but has become common Starfleet technology by the 25th century. It is however still rare in civilian use.

The original mobile emitter was used by The Doctor while onboard the U.S.S. Voyager. Upon his return to the Alpha Quadrant, Starfleet sued to confiscate the device for study. The ensuing court case led to the Soong Foundation creating their own line of mobile emitters. Eventually, it was ruled that the Doctor could keep the emitter, but he worked with Starfleet to study the technology.

Mobile emitters are used by Photonic bridge officers as well as NPCs such as The Doctor, Paul Stamets and Gein; the latter being the only known civilian use mentioned.

When a Photonic bridge officer is defeated in ground combat, their mobile emitter will show on the ground (highlighted with circles); the emitter can be 'resuscitated' to revive the photonic officer.