Mission: War is Good for Business/Walkthrough 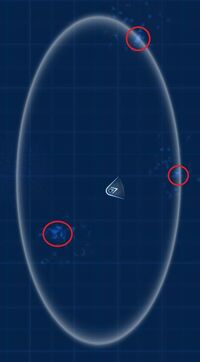 Location of the three asteroids for the Scientific Mission

This part of the episode requires you to help some scientists finish scanning some anomalous asteroids in the Celes sector.

Your efforts are impaired slightly by the fact that each asteroid is surrounded by a gaseous nebula that prevents you from traveling at full impulse (but ironically, not from jumping to warp). The location of the three asteroids is vaguely shown on the map as three hazy areas near the edges of the mission ellipse. The asteroids themselves are hard to miss once you get close enough, as they are giant rocks with crystalline structures in the middle of them. The northern most asteroid will be surrounded by several Syphon Frigates that should be no problem to destroy. You must near the cristal inside of the asteroid to scan it.

Once you are finished, the scientists will ask you to take them to Starbase 114.

After delivering the scientists to Starbase 114, Commander Cleveland will ask you to help them find three missing containers of kemocite, an ore that when refined can be used to make powerful explosives. You and an away team will beam down to the starbase to assist him.

Scene of the Crime[edit | edit source]

Start by talking to Commander Cleveland. He will tell you to search the cargo bays for clues. Take the turbo lift behind him to get to the cargo bays.

Scan each cargo bay by moving to the center of the bay and using your scanner (F-key). You will find that the kemocite was stored in cargo bay 01, but a synthetic copy was left in its place. A grav lift in cargo bay 04 looks like it was used to move the kemocite, but its route was erased from memory.

After completing your scans, you find no evidence of how the kemocite was moved, so one of your bridge officers will recommend you return to your ship and scan all of the nearby cargo ships for the stolen material. There is some anomalous materials in the area that you should scan before you leave, if you haven't already.

When you return the space, there will be several cargo ships around the starbase. Feel free to scan each of them, or just go straight to the S.S. Nandi, a Ferengi cargo ship.

Note: There is a possible bug scanning the Nandi with the F key (it kept auto-cancelling). The workaround is to pull up within 0.1 km of the Nandi and right-clicking.

Once you scan the Nandi, you will detect the kemocite and the ship will immediately flee, forcing you to pursue it. It will take off in the direction it is facing, so if you scan it from behind you can save yourself some time by not having to turn around to chase it.

Follow the S.S. Nandi to the small asteroid north of the starbase, where you'll find several Nausicaan ships defending the area.

You'll have to deal with them before you can scan the S.S. Nandi again.

Once you scan the ship, you will beam down to the hidden base to pursue the thief.

Scans show that the Ferengi is inside the base, possibly trying to sell the kemocite to the Nausicaans.

You must fight your way past several groups of Nasicaans to find the 7 crates of kemocite and mark them for transport. It can be a little confusing to find them, since there are normal crates that can also be searched. Your clue will be that the crates with kemocite will say "Mark Crate For Transport" when you get close to them.

In the final cargo bay, there will be a large reinforced door with a glowing shield in front of it. To open the door, you must go to the rooms to the left and right of the cargo bay and use the terminals there to unlock it. Once opened, you will find Mok (the Ferengi who stole the kemocite) and a few Nasicaans.

Four of the crates of kemocite are in the center room with the large locked door leading to Mok. Two of them are in the air on crates and one is surrounded by boxes in the center of the room. The last is on the right side of the room, on the floor. The other three are in the two rooms where you disengage the locks.

Defeat them, then tag Mok for transport to beam him back to your ship.

Return to the “War is Good for Business” mission page.