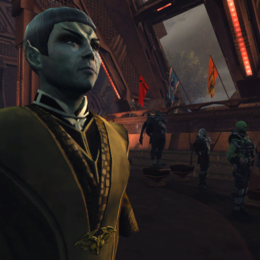 Given by:
Temer
Minimum Level:
9+
Repeatable:
Yes
Preceded by:
“The Search for New Romulus”
Followed by:
“Neutral No More”
Story Arc:
From the Ashes
Released:
21 May, 2013
Rewards
Experience Points:
3120

Representatives from the Klingon Empire, Federation, and Romulan Star Empire meet on Khitomer to discuss recognizing the Romulan Republic as a legitimate interstellar power.

<rank>, we've made a breakthrough.

We can't lay claim to Dewa III and make it our new home without allies. The planet is close to Klingon space, although they've never formally claimed it. If we could get their support, or that of the Federation, we would be able to break away from the Romulan Star Empire without worrying about what the Tal Shiar will do.

D'Tan has been working for weeks to get the Klingons and the Federation to agree to talks. Now representatives from both factions will be at Khitomer to hear our proposal ... and so will the empress. I want you there as well. I think we'll need someone like you on our side.

It won't be easy, but this is our best chance to create a new life and a new home.

Go to the Khitomer System, which is in the Tau Dewa Sector Block, and attend a conference between the Klingons, Federation and Romulans.
This mission can only be completed as a single player. 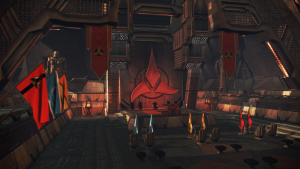 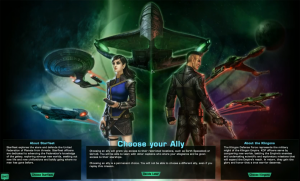 On first attempt Romulan players have to choose their ally: the Federation or the Klingon Empire.