The team starts out east on the map for the Vault.
There will be a 50 seconds briefing phase to read the brief, where you cannot move, but can use abilities. 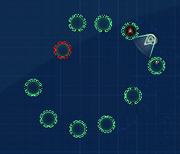 Map depicting starting area, ships to be rescued, with the one marked in red to be handled with care
The aim of this phase is to save the attacked Reman ships.

Once the 5 minutes are over, Phase 1 will end, and an interlude of 30 seconds will start for you to read the brief for Phase 2.

Tholian Vault Weaver
In this phase your aim is to destroy Vault Weavers as quickly as possible. 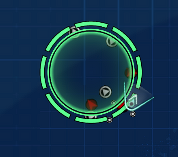 After 7 minutes Phase 2 will end, and Obisek will declare the Vault safe.
Now all that is left is to defeat incoming reinforcements!

After you destroy the last Tholian ship, it is time for rewards!

This mission rewards a container containing Reputation Marks. You will get a second one with 3 marks for defeating the named flagship.