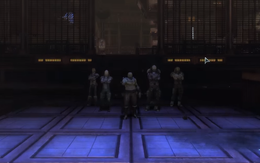 The player enters Shangdu, Hassan the Undying's club. After talking to Jensen and two patrons, they locate Hassan and demand the thalaron triggers. He tells the player that the triggers have already been sold, but offers to give the identity of the buyer away if the player "does something for him". Hassan has the away team beamed into his arena and forces them to fight a pack of warriguls and their handler, a group of mugatos, dozens of Dewan arthropods, and finally a team of his champions - crew of the Snap Dragon. When the player prevails, Hassan himself leads a group into the arena to kill them, but is likewise defeated. Hassan retreats and offers a fortune to anyone who kills the away team, starting a bar fight. The player pursues him, but Hassan manages to transport to his Warbarge Dreadnought in orbit. The player downloads Hassan's database and learns that he has been delivering certain prisoners to the Tal Shiar for an unknown purpose.

The player returns to their ship and finds that Hassan has directed his fleet to destroy all non-Syndicate ships and people in the Nimbus System. The player rescues a Reman T'varo Light Warbird, only to discover that there is a thalaron signature coming from the vessel -- Hassan's buyer, Obisek, is on board. However, the warbird warps out before the player can pursue.

The player rallies the pirates in the area against Hassan's forces, and eventually manages to destroy the dreadnought. Hassan escapes the wreck in a fighter, and the player has a choice of either capturing him or destroying the ship. If they choose to spare Hassan's life, he surrenders himself willingly and offers to tell them all that he knows. The player beams back to Paradise City and debriefs with Law.

You've fond the location of Hassan the Undying's stronghold. He's operating out of his "pleasure palace" – which is in reality a broken-down old ship that's the closest thing this place has to an underground club.

Men, women, fights, illegal deals, Syndicate merchandise – whatever you're looking for, Hassan has it there for a price.

What we want is information. Hassan sold the thalaron triggers to someone. All you need to do is convince him to tell you who so we can try to get them back.

Infiltrate Hassan the Undying's stonghold on Nimbus III, which is located in the Beta Quadrant.

This mission is repeatable through Mission Replay, the Rewards for completing might be reduced.