Choose one of the following

In The Doomsday Device, the player infiltrates a Klingon operation that threatens every world in the Federation.

After commandeering the B'rel Bird-of-Prey I.K.S. Targ, the player learns of B'vat's plan to unleash the Doomsday Machine on Federation worlds. Having confronted B'vat on Imaga, Starfleet is able to disable the Doomsday Device after an ultimate sacrifice by K'Valk.

Starfleet believed that the Klingons were testing their new weapons in the Imaga system.

We have information that now leads me to believe that these testing programs are for something much bigger than a new kind of torpedo.

Starfleet Intelligence has recieved a message from someone claiming to serve in Ambassador B'vat's personal force. This source says that the ambassador's research is complete, and that he is planning on using some sort of a doomsday weapon on Federation worlds.

My aide, Lieutenant VanZyl, will join you for this mission. Go with her to the Donia system. B'vat has a small supply base near one of the outer planets. Our source, a man named K'Valk, says that we will find the information we need to stop B'vat there.

Go to the Donia System, which is located in the Risa Sector of the Beta Quadrant, and find K'Valk. 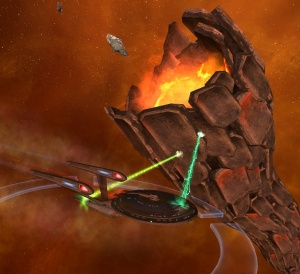 An updated cutscene from Season 15

"The Doomsday Device" was heavily remastered in May of 2011. Additions included an new introduction with the boarding of the I.K.S. Targ, cutscenes, several accolades and many new gameplay mechanics.

The remastered version originally created a continuity error, as it featured B'vat despite his character having been killed off in “Past Imperfect”. This was addressed in Season 5: Call to Arms, which restored the Klingon Front missions to the original (pre-launch) order.

The mission was reworked once more in Season 15, with the removal of the career-specific objectives while repairing the Targ, fixing the map display from the first portion of the mission and working on the trait reset bug. A later update in Season 15, on January 10, 2019, the cutscenes were updated with improved animations.