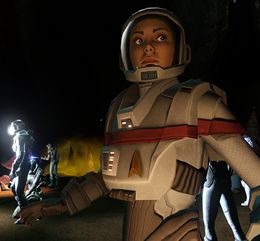 With Havas-Kul likely the homeworld of the Hur'q, Garak, Kira, Bashir and the player head there to see if they can find a way to end the conflict.

Arriving at Havas-Kul, they find the planet abandoned but with significant subterranean development and technology. The atmosphere in the tunnels isn't breathable so the team don EV Suits before beaming down. Shortly after establishing their basecamp, the team is attacked by a Hur'q and fall through the caverns. Now separated, the player works their way through the tunnels learning more about the Hur'q. While the player manages to escape further encounters with the Hur'q that attacked the team, and meet up again with their officers, Bashir and Garak, most of the crewmen from the Defiant are picked off one by one.

Eventually the player gathers the data necessary for Bashir to deduce that the fungus the Hur'q depended upon, which the Dominion removed, was a precursor of Ketracel White. This is then confirmed by the Female Changeling who beams down with Weyoun, Loriss, Dukan'Rex, and some guards. After admitting that her attempt to enslave the Hur'q made them go wildly out of control, Odo reveals himself (hidden amongst Garak's equipment) and challenges her. The Female Changeling orders everyone, including Odo, executed. Garak counters with his own Hur'q signalling device; calling the Hur'q not to Havas-Kul, but Empersa.

Suddenly, the Hur'q from earlier arrives and attacks the Female Changeling, killing her. The team then are forced to take out the Hur'q. Weyoun is determined to carry out the orders to kill them, especially since his Founder is dead. Loriss and Dukan'Rex side with Odo, winning over the Jem'Hadar guards. The team escape through some Hur'q ships in orbit before proceeding to Empersa.

Researchers led by my friend Doctor Bashir have isolated several fascinating aspects of Hur'q biology. I'm told this data provides insight on their native environment; specifically a metallic planetoid orbiting a pulsar within a nebula. There's one system that meets these requirements: Havas-Kul, in the Gamma Quadrant. I'm going to investigate, along with Captain Kira in the Defiant. Doctor Bashir will accompany us as well - his insight will be critical to the mission's success. The doctor believes we'll find what we need to end this conflict on Havas-Kul. If he's right, and he often is, I'm willing to travel to the heart of enemy territory. Won't you join us?