In Temporal Ambassador the player is dispatched to study an anomaly in the Azure Nebula, and finds themselves involved in a pivotal moment in history. It was released as part of STO's 3 Year Anniversary Event. 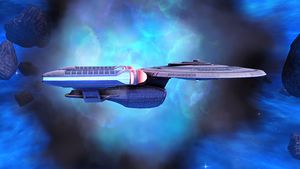 An Ambassador-class cruiser briefly appears in the Azure Nebula...

The player approaches the anomaly but finds that it keeps changing position. After several attempts they finally manage to get close enough for a sensor scan, just as an Ambassador-class starship emerges from it.

Suddenly the timeline has changed. The player is now in command of a freighter, docking at a Tholian asteroid base (which has captured the cruiser). Upon docking, the player reports to Franklin Drake who recounts the history of the new timeline: after the Federation fell to the Klingons decades ago, the Dominion invaded the quadrant and - together with the Cardassian Union and the Breen Confederacy - managed to conquer both the Klingons and the Romulan Star Empire. The Tholian Assembly signed a non-aggression pact with the Dominion, and now controls the Tau Dewa Sector Block. 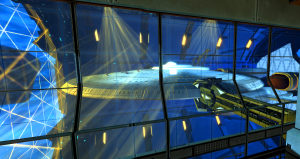 The powerless Enterprise-C in the Tholian asteroid base.

The player goes to the mess hall where they are approached by Richard Castillo. Castillo explains that the ship captured by the Tholians is the U.S.S. Enterprise-C, of which he is a senior officer. The anomaly pulled the Enterprise out of its proper place in history (a hopeless defense of Narendra III in 2344) and the timeline has drastically changed as a result. He introduces the player to Natasha Yar, who explains the situation in more detail and enlists the player's aid in helping them escape and return to the anomaly in the hopes of correcting history.

The player is required to create a diversion so they can sneak into the maintenance tunnels, and after convincing one of the people in the base to help, manages to help Castillo, Yar, and T'nae reactivate and board the Enterprise.

The fleeing starship quickly comes under attack from a massive Tholian task force, but is suddenly rescued by the U.S.S. Pastak: a Wells-class timeship from the 29th Century, sent to help restore the timeline. The Enterprise flies through the anomaly, and the player is briefly taken aboard the Pastak before history corrects itself.

Back aboard their old ship, the player enters the system again but their bridge officers are surprised to report no sign on an anomaly at all. They eventually leave the nebula and report to the mission giver.

<Rank>, we've detected an anomaly in the Azure Nebula.

Because of the Tholian activity in that area, we're concerned that they may be attempting to open a rift to the Mirror Universe. I need a ship to go out there and check it out.

<rank>, Franklin Drake suggested I contact you to assist with a critical mission.

We've detected an anomaly in the Azure Nebula.

Because of the Tholian activity in that area, we're concerned that they may be attempting to open a rift to the Mirror Universe. I need a ship to go out there and check it out.

Go to the Azure Nebula, which is located in the Beta Quadrant, and investigate an anomaly.