Mission: Tear of the Prophets

Tear of the Prophets
Given by:
James Kurland
Minimum Level:
39+
Repeatable:
Yes
Preceded by:
“The Tribble with Klingons”
Followed by:
“Crack in the Mirror”
Story Arc:
Cardassian Struggle
Rewards
Experience Points:
2325

In Tear of the Prophets the Bajoran Orb of Possibilities is discovered on Cardassia Prime, with enemies old and new trying to steal it. 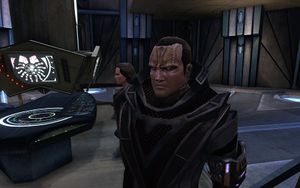 Gul Oran wishes to restore Cardassia to its former glory.

After defeating the Jem'Hadar in orbit, the player beams down to the Ministry of Culture. The player finds that the Ministry's security systems have been activated and detects weapons fire. True Way Cardassian forces have taken over and locked down the facility. The player fights their way through the True Way fortifications to find the architect of the scheme: Gul Oran. The Gul takes the Orb of Possibilities and escapes to his ship in orbit, with the player in pursuit.

The Gul's ship attempts to flee at warp, but the player manages to catch up and disables the Praxeth to secure the orb for Bajor and the Federation. Gul Oran makes one last effort to flee, calling in his unseen allies to reveal themselves: the Terran Empire. The treacherous Captain Shelly, though, immediately destroys the Praxeth as punishment for Oran's failure to deliver the orb. She then departs, with a chilling warning of things to come.

<rank>, a remarkable thing has happened!

We have been notified by the Cardassian Detapa Council that a Bajoran Orb has been found on Cardassia Prime. We believe it was taken from Bajor during the Occupation. The Cardassians wish to return it to Bajor as a gesture of friendship.

The Orbs are sacred to the Bajorans. A handful of these artifacts have been found in the past 10,000 years, and the Bajorans believe that the Prophets sent them to provide guidance and wisdom to the people. From what we can determine, what the Cardassians have is the Orb of Possibilities.

You are to go to Cardassia Prime and meet with Gilora Russol, the Cardassian Minister of Culture. She will give you the Orb for transport to Deep Space 9.

Go to Cardassia Prime, located in the Cardassia Sector of the Beta Ursae Sector Block, and recover an Orb that was taken from Bajor during the Occupation.